Clan Douglas is an ancient family that came from the Scottish Lowlands. They were known as the most powerful families in Scotland. In order to talk more about it, I am sharing this detailed post for you where we will be discussing it. So now let’s talk about the history of this powerful Clan Douglas.

How Clan Douglas was Originated?

The Clan Douglas was considered as one of the most powerful clans of Scotland and they were very influential. The name Douglas was derived from the Gaelic which means “black water”. There were lots of early origin of the clan which remained unknown. However, the first association of Douglas that was recorded is that of Theobald le Fleming, he was granted the Douglas lands in Lanarkshire, by the Abbot of Kelso. The son of Abbot Kelso, William I, was styled Lord of Douglas and he was supposed to be the first man to assume the name.

A few centuries, the Douglas family became the most powerful family of Scotland. There was a famous fighter is known as Sir James Douglas, who died in 1330, was also known as “The Black Douglas”. He fought beside Robert the Bruce during the War of Independence. Robert the Bruce died in 1329; however, shortly before dying, he asked Sir James Douglas to take his heart to Jerusalem and asked him to place it in the Church of Holy Sepulchre.

However, while transporting the heart to the Church of Holy Sepulchre, at Jerusalem, James and the group of Douglas’ were confronted by the Moors of Spain. During this assault, James led a full frontal fight because of that he was called “Foreward Braveheart”. Unfortunately, James and the majority of his followers were killed by Moors in that assault.

As per few history books, the King’s heart was brought back to Scotland and it was buried at Melrose Abbey which is located in the Scottish Borders.

The Douglas territories can be found across the borders and into Northumberland. The main territories of Douglas are located in the Lowlands of Scotland which includes; Lanarkshire, Galloway, Dumfriesshire, and Angus. As a Berwick, I would recommend you to visit these territories to know and explore more about the Douglas family.

Must check: You may know about Clan Wallace here.

There were many battles found by the members of Clan Douglas. The most famous war that they fought was the Wars of Independence during the 13th and 14th centuries. Scotland and England were extremely against each other during that period.

During the Wars of Independence, Sir William Douglas the Hardy, Lord of Douglas, was governor of Berwick-upon-Tweed when the Berwick castle was attacked by the forces of Edward I of England.

There are still some parts of Berwick Castle that are present there. If you are visiting this famous walled town then I would recommend you to walk along the river as you may find the castle ruins there.

In the end, Douglas was captured and there was the condition of his release was contingent on a condition. The condition was to claim of the English King to be the overlord of Scotland. He then joined William Wallace in fighting for Scottish Independence; however, he was captured and was taken to England, where he died as a prisoner in the Tower of London, in 1298.

There was also a Battle of Bannockburn, that happened in June 1314. It was a decisive battle in the history of Scotland. In this battle, Under the leadership of Robert the Bruce, Scots defeated the English under Edward II. It subsequently expanded Robert’s territory and influence. This victory was a combination of Bruce’s demand of 1313 which includes: all of the remaining Balliol supporters acknowledge his kingship or leave their estates, and surrender of the English garrison encircled in Stirling castle. The victory did not help Scots in war; however, it did help the negotiation on the table.

Checkout: What Scots used to wear before Kilts?

The Black Douglas – Why he was called this?

As I have mentioned above that Sir James Douglas was also known as “The Black Douglas”, so In order to talk about it, I am adding this piece.

Sir James Douglas was referred to as “The Black Douglas” by the English due to his brutal raiding style and dangerous way of fighting battles. The siege of Roxburgh Castle in 1314 was one of the most fearsome attacks of Sir James where he disguised his men as cows and led the attack. Lots of people were killed during the siege including the leader.

The Douglas Castle is the historic seat of Clan Douglas. It was well established by 1300 which is why it served as the stronghold for the Douglas clan till the 19th century. This castle was occupied by the English during the Wars of Independence. On Palm Sunday, 1307, Sir James Douglas and a few of his followers trapped the English garrison while they were busy worshipping in the castle chapel, they were burnt down to the ground. The fire did damage the rest of the Douglas castle as well then it became known as Douglas Larder. The fire damaged it to a larger extent and very little was remained of the Castle Douglas, except the corner tower of three storeys and vaulted cellars.

The town was Castle Douglas was founded in 1792 by William Douglas. He made his money from American trade and then created and planned a town on the shores of Carlingwark Loch. The layout of this town was based upon the grid plan pattern where streets as used in Edinburgh’s new town; it was built around the same time.

As time passed, the town has improved and is now the touring spot in the southwest of Scotland. In case you want to know about the Clan Gordon History then read them about here.

Drumlanrig Castle was built by William Douglas in the late 1600s. Drumlanrig is home to the Duke of Buccleuch. As time passed, the Douglas family stayed close to the monarchy, a relationship that was deemed successful by both Douglases and royals. The relationship and arrangement saw some difficult time where James Douglas was one of the lords responsible for driving Marry, Queens of Scots out of the country in 1567.

Drumlarnig is now a tourist attraction and the houses there are internationally renowned Buccleuch Art Collection. I would recommend you to visit this castle as you are going to get 600 years of Clan Douglas history.

The motto of Clan Douglas is “Jamais Arriere”, which means “Never Behind”. The badge of the Clan Douglas feature a salamander encircled in flames and includes their motto. I have just shared the badge below with you.

Now let’s talk about the Clan Tartans of Douglas. There are five different variations of tartan which include; Modern, Ancient, Weathered, Grey Modern, and Grey Ancient.

Following are the names of these Clan Douglas Tartan:

This was all about Clan Douglas and I am sure you must have got to know the complete history of Family Douglas. If you have any more insight about this clan then feel free to write to us, we will be more than happy to quote your information on this blog post. 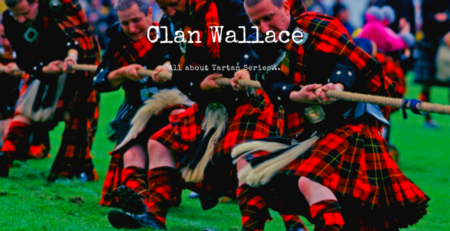 Clan Wallace – All about Tartan

There are lots of tartans that are available in the market... read more 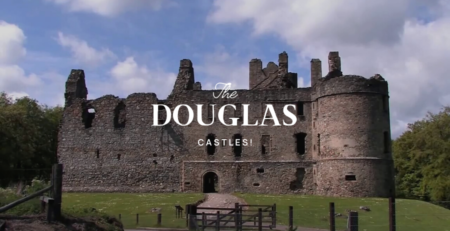 The Clan Douglas was one of the most powerful families of... read more